Built for the Datasphere.

Seagate’s investment of £47.4 million is being supported by Invest Northern Ireland with an offer of £9.95 million. The funding will be focused on enabling further research and development in nanophotonics, cementing Springtown’s position as a leader in world class technology innovation, and creating 25 highly skilled new jobs.

According to a recent IDC study sponsored by Seagate, global data creation will grow from 33 zettabytes in 2018 to 175 zettabytes by 2025, with big data analytics, smart cities and machine learning technologies driving the need to deliver greater data storage capacity.

“Technology innovation is the cornerstone of our success and the industry-leading innovation delivered by our facility in Springtown has been at the heart of our business strategy for the last 25 years,” said Dave Mosley, Chief Executive Officer of Seagate Technology. “Today’s investment extends a successful, collaborative partnership with Invest Northern Ireland and will further strengthen our ability to deliver customer-centric technology leadership for the data-driven future of the global economy.”

Jeremy Fitch, Executive Director of Business Solutions, Invest NI said: “Seagate first came to Northern Ireland in 1994, investing £50 million and creating 500 new jobs. Fast forward 25 years and the facility now employs 1,400 people and it is estimated that the company has invested in excess of £1 billion in capital here.

“Supporting the company along the way has been Invest NI, with every £1 of our support contributing to £4 investment in the local economy. We are delighted to be able to offer support towards this latest project which will see 120 highly skilled researchers here at Springtown, including 25 new recruits, play a major role in the development of ground-breaking new technology.” 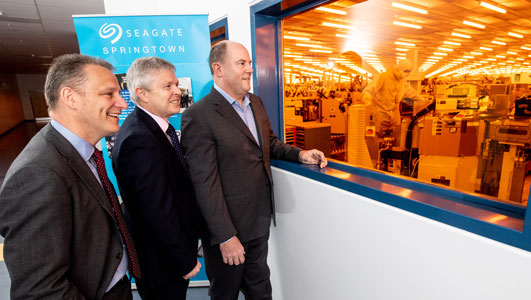 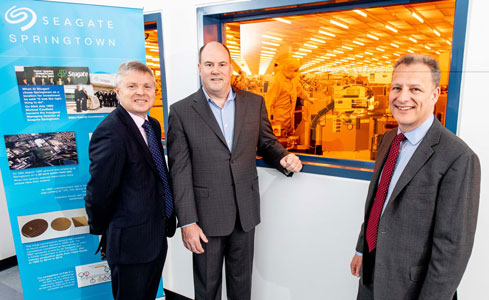 Noel Lavery, Permanent Secretary at the Department for the Economy, welcomed the investment. He said, “Effective collaboration between Invest NI and Seagate has once again boosted the North West and the wider Northern Ireland economy by delivering investment and well-paid jobs in a sector with a strong future.”

Invest NI’s support is part funded by ERDF under the EU Investment for Growth and Jobs Programme 2014-2020.

Seagate’s Springtown facility is recognised as one of the foremost 200mm wafer fabrication plants in the world. The site has grown from an initial charter of world class manufacturing in the first decade of operations to adding development and product launch capabilities in the last ten years. The investment announcement is made as Seagate Springtown celebrates 25 years in business. The facility employs over 1,400 staff and continues to develop leading community and academic partnerships.

©2019 Seagate Technology LLC. All rights reserved. Seagate, Seagate Technology and the Spiral logo are registered trademarks of Seagate Technology LLC in the United States and/or other countries. All other trademarks or registered trademarks are the property of their respective owners. When referring to drive capacity, one gigabyte, or GB, equals one billion bytes and one terabyte, or TB, equals one trillion bytes. Your computer’s operating system may use a different standard of measurement and report a lower capacity. In addition, some of the listed capacity is used for formatting and other functions, and thus will not be available for data storage.