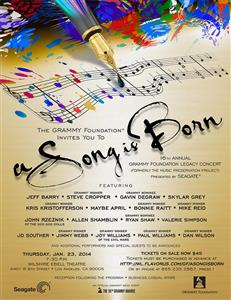 “Digital storage is a vital element in not only the creative process, but also in the archiving of music history. Seagate will continue to recognize the importance of the arts in the furthering of cultural enrichment through our ongoing support for organizations and activities such as the Grammy Foundation,” said Rocky Pimentel, president of global markets and customers for Seagate. “The artists of today are enabled with technology that has opened up a world of collaboration and development that did not exist just a few short years ago. Technology and digital storage in particular have enabled and advanced creative processes that were unimaginable before this prominent role of technology in the creative workflow. Seagate understands our role in helping artists follow their passions and feel honored to support their achievements.”

An official GRAMMY Week event leading up to the 56th GRAMMY® Awards, “A Song Is Born” will explore the history and evolution of the songwriting process and will celebrate the various invaluable contributions of key players behind the music and their impact on the American cultural landscape. This official GRAMMY Week concert promotes the GRAMMY Foundation’s mission of recognizing and preserving our musical past, so that future generations can continue to benefit from an appreciation and understanding of those contributions. Admission is open to the public, tickets are $45 per person and this is an all ages event.  Guests are also invited to attend a complimentary reception following the concert. For tickets and information, visit http://wl.flavorus.com/gf/asongisborn, or contact (855) 235-2867.

SeagateCreative is a community for artists, musicians, photographers and filmmakers. It’s a place to share stories, tips and videos, and learn behind-the-scenes magic. Seagate invites artists and fans to watch and share videos, photos, and studio and backstage stories from SeagateCreative partners, and inspire each other with DIY genius.

Storage products from Seagate are the canvas for today’s creative arts.  From crafting Hollywood blockbuster movies and the music that is the soundtrack of people’s lives to photography that captures the beauty of our world and the grit of real life. Seagate is an integral part of the creative process.