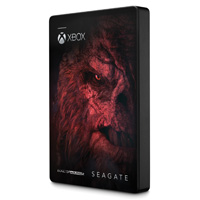 Upgrade your storage for Halo and 50+ other Xbox One games

Feb. 16, 2017 – The latest special edition Game Drive for Xbox® from Seagate® is here! In collaboration with Microsoft® and 343 Industries, Seagate introduces the Game Drive for Xbox Halo Wars® 2 Special Edition Portable Drive. Emblazoned on the drive’s enclosure with an image of Atriox, warlord of the banished and fearsome villain, this product is the perfect complement to the long-awaited Halo Wars 21 set to release next week.

The newest addition to Seagate’s popular line of storage for gamers, the Seagate Game Drive offers 2TB of capacity to store 50+ Xbox games2, plug-and-play functionality and compact size. Now, players can free up space on their console’s internal drive while consolidating all their favorite Xbox games into a single location, boosting storage for Xbox One S and Xbox One.

Setup is easy. Xbox automatically detects and helps gamers set up the new drive in seconds. And with USB 3.0 speeds, games playing from the Seagate Game Drive will perform just as if they were playing from the console’s internal hard drive.

The drive is easily portable, meaning gamers can even bring it—and their entire game library—to a friend’s house3. It’s small enough to slip into a pocket, doesn’t need a separate power cord and can store a catalog of downloaded games and achievements for continued gameplay on any Xbox One S or Xbox One console.

The Seagate Game Drive for Xbox Halo Wars 2 Special Edition will ship later this month for an MSRP of $99.99. It will be available in limited quantities, so be sure to grab one before they’re gone!

1 Halo Wars 2 game sold separately.
2 Average game size is 35–50GB. Quantitative usage examples are for illustrative purposes.
3 Requires Xbox Live login from original game owner.
When referring to hard drive capacity, one terabyte, or TB, equals one thousand billion bytes. Your computer’s operating system may use a different standard of measurement and report a lower capacity. In addition, some of the listed capacity is used for formatting and other functions and will not be available for data storage. Seagate reserves the right to change, without notice, product offerings or specifications.