Showcases Award-winning Products for Video, Photos and Music;
Teams with Vans for the ‘House of Vans at the Mohawk’ Music Showcase and Online Sweepstakes

AUSTIN, TX — For the 7th consecutive year, Seagate Technology plc (NASDAQ: STX) will be all over the annual South by Southwest Interactive, Gaming, Music and Film festival (SXSW). Storage is the founding technology that has enabled so many innovative advancements in entertainment, business and beyond, where creative minds of all sorts find Seagate at the heart of so many of their projects. 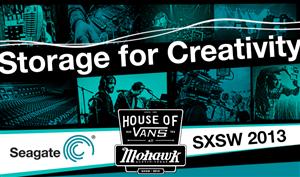 Seagate to showcase award-winning products and teams with Vans for the 'House of Vans at the Mohawk' Music Showcase for SXSW 2013.

At the Tradeshow:
From Sunday, March 10th to Wednesday, March 13th, Seagate will demonstrate the company’s award winning products for Video, Photos and Music. Come by the Seagate booth at the Austin Convention Center (#1307, #1309, #1406 and #1408). On Tuesday, March 12 at 4:00 pm make sure to come by the booth for the block party. Have a snack and a cold beverage on the house and check out these Seagate Wireless Plus, Seagate Central and Seagate Backup Plus in action.

The following is a list of products to be showcased during the festival:

Win Some Epic Gear:
To commemorate the week of technology’s convergence with the arts, Seagate is hosting the “House of Vans” Sweepstakes, where you could win a mobile music production package — an iPad, a Seagate Wireless Plus, an Apogee Electronics MiC iPad microphone, and ten music production Apps — along with the complete “House of Vans SXSW VIP Pack” which includes a pair of custom Vans!

The sweepstakes runs through March 18, 2013. To enter, visit Facebook.com/SeagateCreative and click the House of Vans Sweepstakes Tab, or enter here: Seagate House of Vans Facebook Contest.

About Seagate
Seagate is a worldwide leader in storage solutions. Learn more at http://www.seagate.com.