This article discusses the cable interfaces available on every kind of Seagate and Maxtor-brand external hard drive, the environment in which it is best to use each, and instructions for each connection.

Click on a category below to be taken to the relevant section and illustrative graphics.
See Document ID: 214431 for cabling information about FreeAgent GoFlex drives.

USB is the most common connection type for external devices, whether external hard drive, thumb drives, flash drives, printers, cameras, all kinds of other devices.  It is extremely easy to use. Whether the computer is powered on or powered off, simply connect the cable to your device and it should be ready to be used less than 30 seconds later (depending on your computer's speed).

The USB symbol is usually found near the ports on the computer.

Most USB cables that come with Seagate and Maxtor-brand drives look like this. Note that the connection size for the connector on the drive is smaller than, for example, a USB port on a printer, but many digital cameras use the same size connection.

Certain Seagate and Maxtor-brand drives are powered only by USB, so they do not have a separate power cord.  They usually draw enough power from one USB connection, though sometimes plugging both of the cables in will be necessary, or plugging the one cable into a powered USB hub.  These drives are named and linked here, with a picture of their cables.

USB 3.0 is another generation of USB. In computers where all the devices and drivers are compatible with USB 3.0 peak performance, it provides significantly better performance than USB 2.0.

It is also backwards-compatible with USB 2.0, so a USB 3.0 device and cable is compatible with a computer that only has USB 2.0 ports. It is extremely easy to use. Whether the computer is powered on or powered off, simply connect the cable to your device and it should be ready to be used less than 30 seconds later (depending on your computer's speed).

The USB symbol is usually found near the ports on the computer.

FireWire is a similar connection to USB, in that it is plug-and-play.  Simply connect your device to the computer and it will usually be ready to be used within 30 seconds.  FireWire is much more common in Mac computers than in Windows computers.

See here a graphic of the two different kinds of FireWire cables and ports.

See here a close-up graphic of a typical FireWire 400 port.

eSATA (external Serial ATA) is a high-performance interface most commonly found in Windows PCs, but is fairly rare.

Seagate products that have this connection are:  FreeAgent XTreme, FreeAgent Pro (classic), and the Seagate eSATA drive.

See here a graphic of the eSATA cable and the port.  Please note that the cable's connector and the port look similar to that of a normal Serial ATA connector and port, but they are not intercompatible due to small physical differences.

Powered eSATA provides high performance like eSATA, but like USB 2.0 it also provides electrical power to operate a drive without needing to use a separate power cable for the drive. This interface is even more rare than eSATA. One of the types of FreeAgent GoFlex upgrade cables, which is compatible with the FreeAgent GoFlex and GoFlex Pro, uses the Powered eSATA interface.

See here a graphic of the upgrade cable.

Serial ATA is the most common connection for internal drives in modern PCs and Macs.  There can be multiple SATA ports on any one motherboard or controller card.  One cable connects one hard drive to one port on the motherboard (as opposed to Parallel ATA).

See here an image of a red SATA cable and a black SATA cable, as well as a head-on view of the SATA connector.

See here a drawing of the back of a SATA hard drive, with the data cable and the power cable connecting into it.

Some SATA drives include a small power adapter that plugs in to the normal power cable inside an older PC or Mac so that it will fit the SATA drive.
(Click to expand)

See here an image of that power cable adapter. 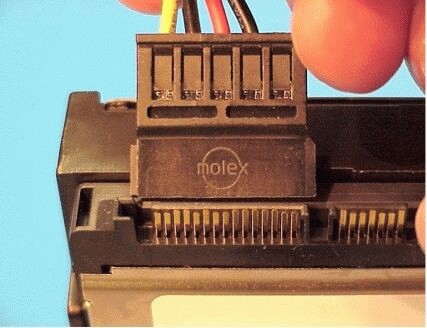 See here a close-up illustration of the adapter fitting into its power connector on the SATA drive.

ATA is a very common connection for internal drives in older PCs and older desktop Macs (before G5), and for devices like CD and DVD drives in modern PCs and Macs.  It is a connector about 2 inches (5 cm) wide and has 40 small gold pins that will fit into the corresponding 40 small holes on its corresponding connector.
There can be two or four ATA ports on any one motherboard.  One cable can connect to two devices at the same time.

See here an image of a normal ATA cable.

Grey (middle) connector - is used for slave devices on the cable.

An ATA hard drive will also have different jumper settings depending on whether it is connected as slave or master.

Finally, see here an image of the ATA cable and the power cable connecting into the back of an ATA drive.

The M.2 connector is designed for small form factor devices, so you will mostly see it inside of tablets and laptops.  This connector supports both wireless cards and SSDs, as well as NVMe commands. 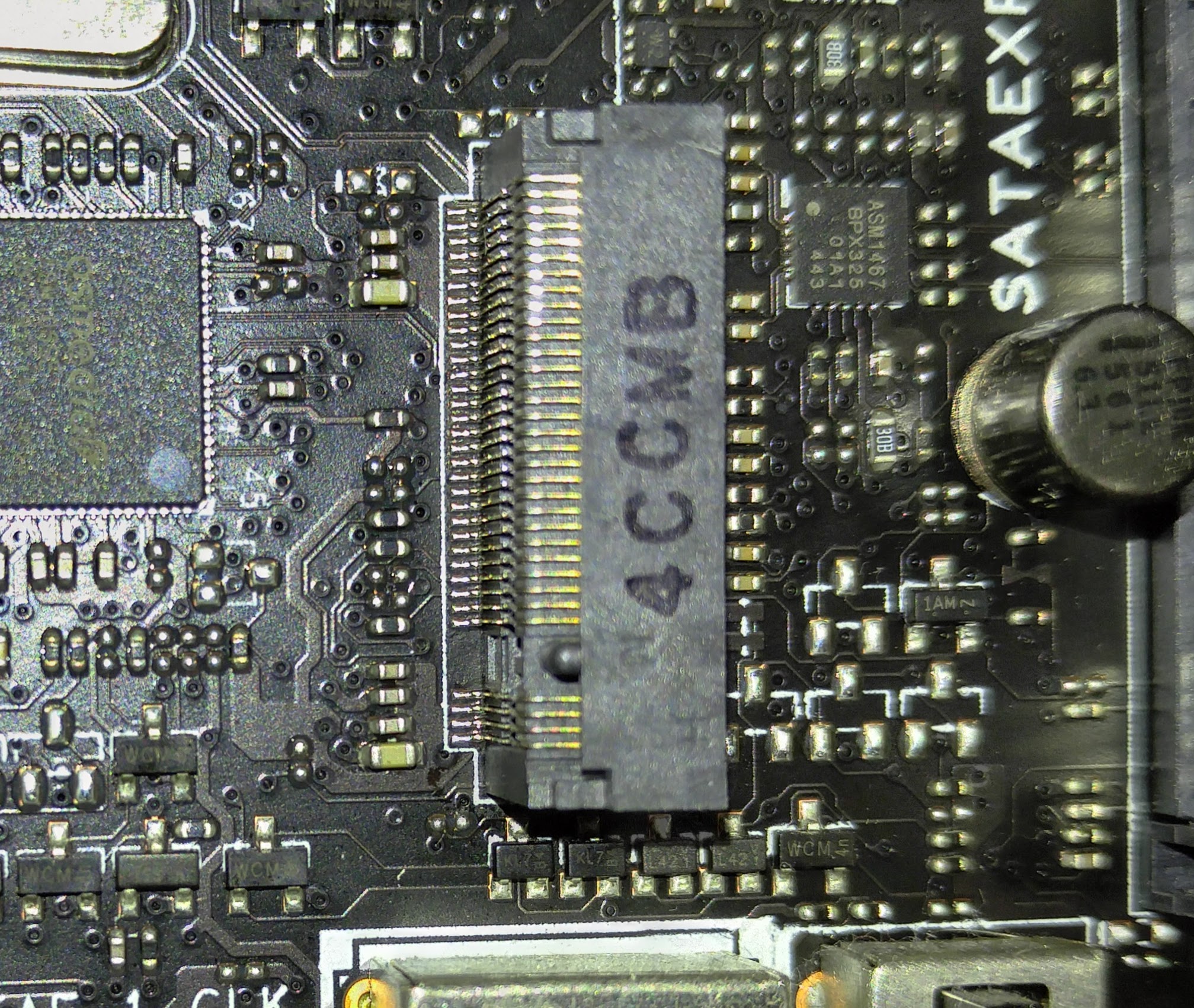 The SFF-8639 connector was renamed to a more consumer friendly U.2.  This connector is used with some new NVMe SSDs.  U.2 utilizes 4 PCIe 3.0 lanes to provide speeds much faster than the SATA interface.  Since most motherboards do not have a U.2 connector on them, a M.2 to U.2, or PCIe to U.2 adapter can be used.

Ethernet is the same connection type that your computer uses to connect to its Internet device (cable or DSL modem, etc).

See here an image of the Ethernet cable.

See here an outline of the port into which the cable connects.