Founded by Creative Directors Adam Dionsio and Benjamin Baggay, Redscope Films is a boutique creative content production studio based in Sydney, Australia. Since its inception in 2014 the team has created campaigns and video content for a wide range of clients including Hype DC, Adidas, Sony Australia, DJI, No More Ugly, 9 degrees Gym and more. They focus on creating content that tells a story in emotive language delivered using Photography, filmmaking and animation.

In late 2018, the team was contacted by DJI, a company renowned for their drone photography devices, to help launch The Osmo Pocket, a portable camera mounted to a three-axis gimbal. Since it was unlike other products by the company, Redscope devised a campaign centred on how the device could be used and the freedom of creativity it could unlock. Shooting in Finland, the team set out to capture the incredible beauty of the country in the summer months. However, shooting on the other side of the world also created a challenge since the rest of the production crew were back at the Sydney offices.

Redscope decided to build a NAS system with the help of Seagate and QNAP in order to develop a new workflow that would allow remote teams to collaborate and share assets with each other. For the drives, they chose the Seagate IronWolf Pro 14TB due to its reliability, features and warranty. They settled on the QNAP TS-453Be for their NAS enclosure, a quad-core device with options for future expansion.

Seagate IronWolf Pro drives are designed specifically for 24/7 performance and are rated at a 1.2 Million hour MTBF. In a system under heavy use, this allows for superior confidence in drive reliability. Each drive is also backed by a 5 year limited warranty and comes with 2 years of Seagate Rescue Data Recovery, a service that covers any mechanical, accidental or natural disaster that prevents a drive from working properly. The drives also feature Seagate’s AgileArray technology, a set of hardware, firmware, and software features, provides further improved performance and Advanced AcuTrac Technology with Dual Plane Balance for improved vibration tolerance and quiet operation.

Over the course of the campaign, they found that the QNAP TS-453Be, paired with Seagate IronWolf Pro, elevated their production pipeline which made the DJI project more streamlined and collaborative. Remote teams were able to upload directly to the NAS which they used as a central hub for all production files. This also eliminated scenarios where they needed to locate an array of drives in order to find specific project files or data. Productivity also sky-rocketed by implementing a system designed for multi-user environments at high workload. By centralising the data it made the experience of editing more succinct, especially for the campaigns deliverables.

For Redscope Films, using the Seagate IronWolf Pro 14TB drives completely changed their production environment. The reliability, warranty and recovery also added an extra layer of protection for their work with increased productivity thanks to the speed of the drives and robust feature set. By switching to a NAS based system, it increased productivity with unlimited creativity. 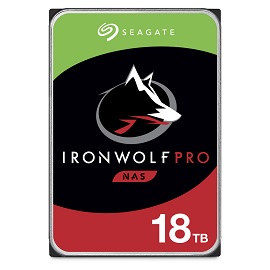