Hard drives, SSDs, SSHDs. With so many storage choices, picking the best one for your gaming setup can feel daunting. We’re here to make it easier. Read on. 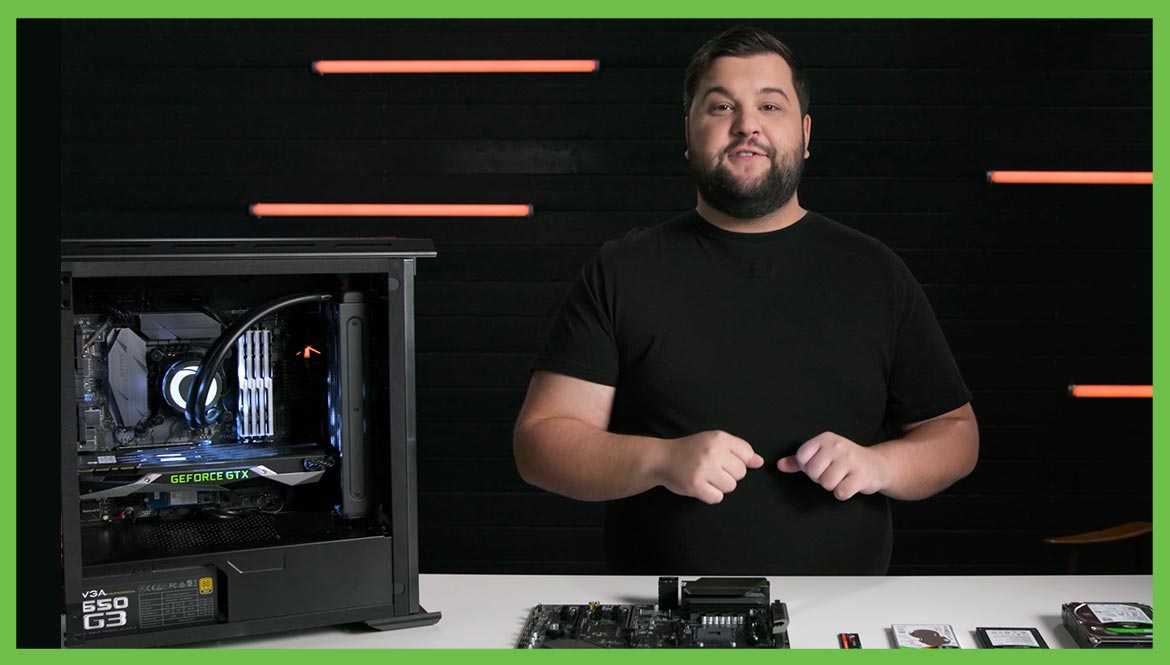 So, which of these is right for you? Find the answer by asking yourself these four questions.

1. What kind of drives are compatible with my motherboard?

First thing’s first. Get to know your motherboard manual before you start shopping for storage because it may decide what kind of drive you can purchase.

What kind of storage connections does my motherboard have?

Do you have multiple M.2 slots? Are they NVMe? Do you have SATA connectors? Or, do you have both? If you only have SATA and want to upgrade from an HDD to an SSD, you’ll be restricted to the 2.5 inch SATA SSD, like Seagate’s BarraCuda SSDs. But if your motherboard has an NVMe M.2 slot, you’ll be able to consider a smaller M.2 SSD drive, like one of Seagate’s FireCuda SSDs. When looking at M.2 SSDs, it’s also important to confirm which generation of PCIe your motherboard has. PCIe Gen3 is most prevalent, but PCIe Gen4 is now an option. If you have a PCIe Gen3 motherboard, you’ll want to use a PCIe Gen3 SSD like FireCuda 510. If you have a PCIe Gen4, you can still use a PCIe Gen3 SSD, but you’ll want a PCIe Gen4 SSD like FireCuda 520 to take advantage of the faster speeds.

How much space can I spare?

When it comes to your gaming rig, how much room do you have on the inside? Whether you game off a desktop or laptop, it’s all about efficiency of space on the inside. Do you have a tower with lots of room and crave massive capacity? Then a 3.5-inch drive like the BarraCuda HDD is great because it gives you loads of it. If you’re on a laptop, you’re going to be more constrained on space. If you have a M.2 slot with NVMe capabilities, then you might opt for a FireCuda 510, which comes in a M.2 2280 form factor (meaning it’s 22 millimeters by 80 millimeters) and packs a big speed punch for something roughly the size of a stick of gum. But if you only have a 2.5-inch hard drive installed in your laptop with no M.2 slots, you may want to opt for a BarraCuda SSD for an easy swap-out upgrade.

2. How much capacity do I need to store and run my games?

How much storage capacity you need depends on what you do with your system and how you game.

Do you like to download and play one game at a time? And once you beat it do you move onto the next title never to come back? Is your PC dedicated to mostly gaming? If it is and you don’t keep a lot of games stored on the PC, you may be able to suffice with a lower-capacity SSD.

Conversely, do you play multiple games at once? Or like to keep a full library on your machine so that you’ve got all your favorites at your disposal? Are you also storing music, movies, and game recordings? For scenarios like this where you’ve got large data needs and use your machine for multiple purposes, like video editing and gaming, you should consider a dual drive setup. One that’s becoming increasingly popular is to have a super-fast SSD for your boot drive and a secondary HDD like IronWolf Pro (currently available in up to 16TB) to store large media libraries. Why? Because it provides the best of both worlds.

This kind of setup also helps with performance and longevity. As an SSD gets closer to full capacity, performance dips because the drive has to sort through more data for reads and has less options for writing. But—if you only keep your operating system, most-used applications, and media files on your primary SSD boot drive, and keep larger, less-used files on a secondary high-capacity HDD, you’ll keep your primary drive running at peak performance.

3. How much budget do I have for this build or expansion?

When it comes to drive selection, budget matters. So ask yourself—do I need more speed, capacity, or a little of both?

HDDs are by far the best when it comes to cost-per-byte, so if storage capacity is top of mind, you’ll save the most money going with an HDD.

Now it’s time to think in terms of price-per-iops. IOPS stands for input/output operations per second—which is how quickly information can be written and read. So if you want more speed for your money, go the SSD route.

I need a little of both.

If you’ve got a little to spend and you’re happy landing somewhere in the middle of space and speed, then go with an SSHD for some of that hybrid action. Spacious capacity and accelerated performance—it’s the best of both worlds.

4. What kind of performance do I want?

Performance boils down to speed and data efficiency. And like we’ve mentioned above, SSDs are the undisputed champs in that realm. But again, check your motherboard’s connection interface to make sure it’s compatible with the kind of drive you’re looking for. So, which below describes your performance needs?

Speed is important but not the be all end all.

If the thought of insanely fast speeds doesn’t raise the hair on your arms, then an HDD might be your best bet. When it comes to HDDs, the speed spec to pay attention to is RPM. Most hard drives come in either 5400 or 7200 RPM—the thing to remember is the faster the RPM, the faster the drive.

Give me speed but don’t break my bank.

A 2.5 inch SATA SSD is 30× times faster than a standard HDD. So yeah, SATA drives deliver speed. They also with the same interface as HDDs and in similar form factor, so make for easy and effective upgrades from HDDs.

Give me speed all day, every day.

If a SATA SSD that’s 30× times faster than a standard HDD excites you, then consider the fact that an M.2 NVMe SSD is 6× faster than a SATA SSD. If this pro-level performance is what you crave, FireCuda delivers the fastest speeds around. So whether you’re giving Ninja a run for his money in endorsements, or just looking to make your WoW clan jealous, we’ve got you covered.

Thanks for reading ladies and gents. Hopefully this has helped you work through some of the more pressing considerations of choosing the right PC gaming storage.