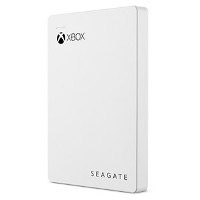 More Capacity
With up to 4TB of storage gamers can free up space on the console’s internal drive while consolidating 100+ Xbox One games.** Game Drive for Xbox is compatible with both Xbox One and Xbox 360, and plugs directly into any USB port on the console. USB 3.0 delivers fast gaming—just like playing from the console's hard drive.

Easy Setup
Plug-and-play functionality gets the user up and playing in no time. Xbox automatically detects the drive and walks the user through a hassle-free setup that will have the drive game-ready in minutes.

Play Anywhere
Super compact and designed for Xbox, gamers can take their favorite games and the hottest titles from the Xbox Game Pass catalog along with them—wherever. Simply unplug the Seagate Game Drive for Xbox and take an entire game library to a friend's house.*** It's small enough to slip into a backpack and doesn't need a separate power cord, so users can play their own games anywhere.

© 2017 Seagate Technology LLC. All rights reserved. Seagate, Seagate Technology and the Spiral logo are registered trademarks of Seagate Technology LLC in the United States and/or other countries. All other trademarks or registered trademarks are the property of their respective owners. When referring to drive capacity, one gigabyte, or GB, equals one billion bytes and one terabyte, or TB, equals one trillion bytes. Your computer’s operating system may use a different standard of measurement and report a lower capacity. In addition, some of the listed capacity is used for formatting and other functions, and thus will not be available for data storage. Quantitative usage examples for various applications are for illustrative purposes. Seagate reserves the right to change, without notice, product offerings or specifications.