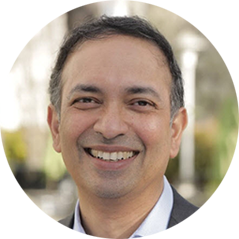 In his role as CIO, Ravi Naik is leading large transformative initiatives, leveraging ideas and platforms focused on future growth.  With his passion for technology, as EVP of Lyve Cloud, he is pioneering the next chapter of innovation and leadership in Seagate storage services.

Prior to joining Seagate in 2017, Ravi was the senior vice president of technology at Katerra, a startup revolutionizing the construction industry by transforming the way buildings and spaces come to life.  Before Katerra, in 2007 Ravi joined SanDisk to lead an enterprise-wide transformation initiative.  Following the success of SanDisk transformation, he was appointed CIO, remaining with the organization through its sale to Western Digital in 2016.  Before that, he held leadership positions in Mercury Interactive, Hewlett Packard, and 3Com Corporation.  Naik holds a bachelor’s degree in Electrical Engineering from the University of Bombay in India.